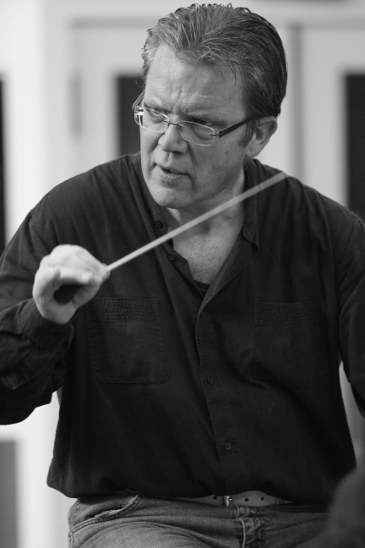 Alex Schillings was born in 1957 in Gulpen (The Netherlands). Already from childhood he was surrounded by music; especially wind and classical music played a central role in the Schillings family. At the age of 8, Alex became trumpet player in the local wind music band and after completion of his music studies at the academy of Maastricht he choose to join the Maastricht conservatoire; there he specialized in music score, the trumpet and conducting wind music bands.  In 1983 he successfully graduated as ‘Executive Musician Wind Band Conductor’ in the class of Rien Rats. Alex completed an additional study of orchestra direction in the class of Lucas Vis and Anton Kerstjes.

In 1985 Alex won the “silver conductor stick” at the prestigious International Conductor Contest organized by the World Music Contest (WMC) organization of Kerkrade. Afterwards he realized many contest successes with several orchestras. Prominent wind band orchestras, such as St.-Jozef Kaalheide, St. Joseph/Meers and Sainte Cécile Eijsden performed under his guidance.

Alex is also active as professor ‘wind band conductor’ at the conservatoires of Zwolle and The Hague. He is member of the jury for several national and international wind band contests. In 2005 he was member of the jury of the first division at the World Music Contest in Kerkrade. Also in 2005 he was seated in the jury of the international conductor contest at the European Brass Band Championships in Groningen. Since august 2003 Alex Schillings combines professorship and his conductor and jury work with his task as wind band consultant at the ‘Unisono’ organization in Utrecht.

Since 2005 September 1st Alex Schillings is the new conductor of the main orchestra of the Royal Concert Band of Peer.